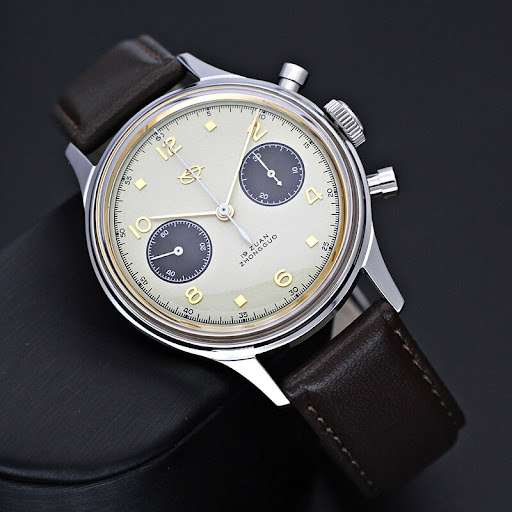 If you’re a watch fanatic, you’re in for a treat. Today, we’re shining some light on a pretty under-the-radar collection of timepieces: The Hked Seagull 1963 watches. Before we get into the Hked watches, let’s provide some context and tell you about the Seagull 1963 watches, since the Hked 1963 are based on those.

The Seagull 1963 is an iconic watch with an unheard of combination of historical significance, a valuable movement, a very unique design ánd it is affordable! The Seagull 1963 as we know it today, is based on the original “Project 304”, which was created for the Chinese Air Force in 1966, with an initial run of only 1400 pieces.

Production of the movement was restarted when Tianjin Seagull Corporation was founded in 1992, with commemorative “Sea-Gull” chronograph watches employing the ST19 movement, debuting in 2005.

Since then, the ST19 series has grown in popularity among budget-conscious watch collectors all over the world.

This homage watch has gained a substantial community around it and throughout the years, many new designs and variants have entered the market.

A few of them are very close to the original design, with just a different size of case or a different color dial. In 2017, a forum user named Hked (Ed is from Hong Kong) teamed up with the same people that created the popular Seagull 1963 reissues (Thomas, the owner of Red Star watch factory to be exact) to create new versions.

With these Hked watches, the chronograph subdials have been gently recessed and textured with small circular ribbing, while the casing and acrylic crystal remain unchanged.

The PLAAF’s ‘star trek’ logo has taken the place of the Chinese red star logo. The second hand of the red chronograph has been replaced.

The dial wording ’19 ZUAN ZHONGGUO’ has been changed from the original Chinese to English.

They have the exact same movements, the exact same ‘template’ for the design, but just a few design tweaks, which many people seem to love a lot. The Hked chronograph is the same as the seagull chronograph. This Sea-Gull ST19 movement is based on the Venus 175 family, which was sold to the Tianjin Watch Factory in the early 1960s after it went out of production.

These watches are powered by a 19-jewel hand-winding chronograph movement with a 40-hour power reserve. The Seagull’s movement is consistent and is actually quite precise.

The running seconds and elapsed minutes are displayed on the two available subdials. The minute dial, like other mechanical chronographs, only counts 30 minutes since it would be impossible to read accurately otherwise.

The first prototype finished in 1963, a date that has remained synonymous with all of the variants available from the seagull 1963 watches today. The Hked ed63 (it’s what they are referred to) watches come in many stunning designs.